The Dance of Torah: Closing Thoughts on Biblical Criticism

The relationship between question and answer is more complicated than we think. We often think of the question as the pretext for the answer and the answer as the response to the question, but sometimes the two share a deeper intimacy. Susanne K. Langer, the philosopher and writer, noted that “every answer is concealed in the question that elicits it, and that what we must strive to do, then is not look for the right answer but attempt rather to discover the right question.”

In this week’s Weekend Reader, we look at Gil Student’s background and perspective on Biblical criticism, and offer closing thoughts on this weighty topic.

The interplay between person and perspective is important when considering Gil’s thoughts on Biblical criticism. Gil made what he calls “the reverse commute” to Biblical criticism – he started in the Conservative movement, and came to a more traditional approach to the Torah through his own questions. In his words with 18Forty:

I grew up in the Conservative movement, I went to Solomon Schechter as a child, and when I learned Chumash, it was from the perspective of Biblical criticism. We were never taught that this is something unusual. As you’re taught as a child, how you read the text and where it came from, we were taught it came from multiple sources over time, that’s just the normal way to read Chumash. And that’s the way I started learning Parsha as a child was from the perspective of Biblical criticism. It was only when I was later, I remember in my eighth grade graduation from Solomon Schechter they said, “When you get older you’ll realize what a unique education you have.” And they were so right about that, because later in life I realized just what an experimental education that I had growing up in that environment.

But early on it just didn’t add up to me, and I don’t think I was the only one. When we were, say, learning Rashi, whatever grade we were in as a young child, we’d all say, “Well, why does Rashi’s question make any sense? Just say there were different sources and then you have no question. This pasuk says that, this pasuk says that, the contradiction in the verses, just say they’re different sources.” And as children will be, it was the lazy way out. Instead of trying to think critically about what is going on in the text and what is going on with these multiple texts, we would just say, “different sources,” and we’d move on, when really there’s a whole other level of understanding, and I wouldn’t even say other level, just a basic understanding requires reading a text as it’s presented in front of you. And we were not doing that at all.

This background influences your life, and the direction to which one comes to questions of faith and doctrine. Gil is self-aware of the impact this reverse directionality has made in his future thinking:

I did that reverse commute in life, in which I started in the opposite place and moved in the opposite direction, which has been a theme throughout my life of what I do. But one thing that it’s given me an appreciation of is the subjectivity of all these different approaches, and how there’s a certain attraction of rebelliousness, of changing, of moving on, moving away from what you were taught. So I rebelled against the Conservative movement and the Biblical criticism, and I’m satisfied with where I ended up, but I think a lot of people who go in the opposite direction are, to some degree, doing the same thing. And I don’t think it’s a conscious rebellion.

I think if you’re taught certain basic ideas, it’s natural in life to then go on and question them. And this is a key theme, or key idea, a perspective, is that where you start from makes a big difference on where you’re going to end up. It makes a difference on how you see everything. If you come from an education where you are taught that the Torah is a single text that came down from heaven, and then you have questions about that, you could, some people do, start to question the entire structure and just throw it away.

People come to faith — and to faithful questions — from different places, and one’s relationship to the questions they ask is deeply wrapped in their personal past. For Gil, this direction has contributed to his standing as a deeply engaged critic of Biblical criticism. In a piece on Torah Musings, “A Maimonidean Perspective on Biblical Criticism,” Gil stakes out a position rejecting Biblical criticism in light of what he considers a Maimonidean balance of respect for reason and revelation. Respect for reason does demand accepting easy solutions to hard problems, and as many of the assertions of Biblical critics are either unproved or unprovable, this does not prove a clash between reason and revelation that need unsettle the delicate balance. In a different piece, “On the Text of the Torah”, Gil looks in-depth at each of what he calls the ‘witnesses’ of evidence to the Torah, and considers the sum total of what such study has offered. His conclusions are similar: “ After tracing through the transmission of the Torah, we find that it has been preserved in an almost perfect form.”

But Gil’s critical perspective on Biblical criticism doesn’t inhibit openness or appreciation for what he considers the good of the field:

Our Maimonidean task is to take the good and reject the bad from Biblical Criticism. This is no easy task. Indeed, some of the best and brightest scholars have attempted to do so and failed to proceed to the Rambam’s final step. But others have succeeded magnificently in following the Rambam’s teachings by learning from everyone and taking the good without the bad. (Every individual must consult his own advisors before delving into the theological minefield that is Biblical Criticism.)

Gil grounds this in the Rambam, who was open to all positions as stepping stones in the path to his own:

Professor Fox’s words are instructive, and can illumine the goal of the religious project of many:

My contention is that Maimonides did not simply choose one of these positions and reject the others absolutely. Instead he found a measure of merit in each of them that makes it worthy of playing a role in our understanding of the origin of the world…

Wise words for the curious 21st century reader — finding faith between raindrops — with the newfound freedom of choice that the radical democracy of the internet era has engendered.

Closing Thoughts: The Torah in Between

The Jerusalem Talmud (Taanit 23) offers a bizarre perspective on the breaking of the Tablets.

“You did well in breaking them.” Rabbi Shmuel bar Nachman said in the name of Rabbi Yonatan, “The tablets were six handbreadths long and three broad. Moshe held onto two handbreaths and the Holy One, Blessed be He, held onto two of them and there was a space of two handbreadths in the middle. When the Israelites worshipped the golden calf, the Holy One, Blessed be He, tried to snatch the tablets out of Moshe’s hand. Moshe’s hand was stronger, and he snatched them from God, as Scripture praises him in the end and says (Deut. 34), “For all the mighty hand…”–May there be peace on the hand that “overcame” Him…

In the imagination of the Midrash, there was a sort of metaphysical tug-of-war between Moshe and God, each grasping two tefachim/handbreadths, until Moshe overwhelmed God. Although this text is rich with possibilities, perhaps the Midrash is communicating an eternal truth about the condition of the Torah. Perhaps the Torah is always in a limbo space, suspended partially in God’s hands, partially in the hands of humanity, and partially in between. The two handbreadths held by Moshe is the Torah as it is held by humanity — attainable, graspable, immanent, speaking in the language of its contemporary context. This is the text in human perception. The two handbreadths held by God is the divine Torah — unattainable, ungraspable, metaphysical, transcendent, the mysterium tremendium of the Bible. This is the face of the  text that humanity does not grasp. The two handbreadths between is the space in which Torah is most interesting. Thrust between known and unknown, this is the space in which we question and argue the relevance and limitations of the text. It is in this middle space that the problems and possibilities of Biblical criticism dwell. Concerned readers might be inclined to think of the questions of Biblical criticism as humanity dragging the Torah down, pulling the Divine text too close to earth. Such an attempt shattered the Luchot once, after all. Humanity has the power to shatter the Luchot, if we don’t respect the subtle balance of the text. Such concerns are valid. On the other hand, the images of the Midrash paint the complicated makeup of the Torah as shared by God, humanity, and the liminal space between for good reason – the text is shared between different parties. Approaching the text is a fraught task, and the road to the text is paved in this sacred struggle between humanity and God, each clutching this most beautiful text in loving embrace. 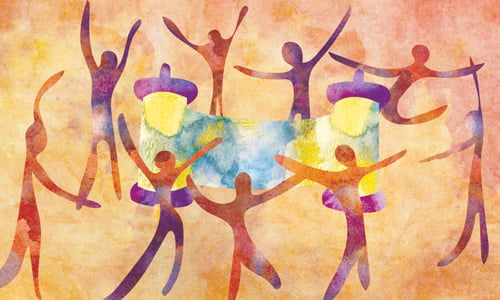 Art by Sefira Ross, from Chabad.org

“All tempest has, like a navel, a hole in its middle, through which a gull can fly in silence.” In thinking through Biblical criticism, occupying the still at the center of the storm is far from easy. The stakes are high in this topic, and the storm is fierce. The stillness at the center is like the two middle tefachim, the handbreadths, of the Torah, torn between Moshe and God. Between the known and the unknown, between the human and the Divine, there is a stillness in which the curious can learn and the faithful can find faith. The poet T. S. Eliot may have been writing about these two tefachim when he wrote,

At the still point of the turning world. Neither flesh nor fleshless;

Neither from nor towards; at the still point, there the dance is,

But neither arrest nor movement. And do not call it fixity,

Where past and future are gathered. Neither movement from nor towards,

Neither ascent nor decline. Except for the point, the still point,

There would be no dance, and there is only the dance.

I can only say, there we have been: but I cannot say where.

And I cannot say, how long, for that is to place it in time.

For more on this topic, visit https://18forty.org/bible/