Edmond Jabès Had Questions—and He Learned to Live With Them 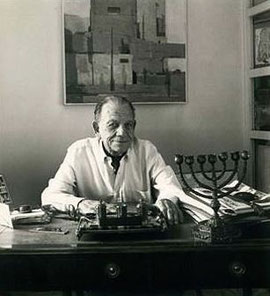 Edmond Jabès, it seems to me, does not write from within Judaism, from the accepted practice of Jewish law. He speaks from outside, from the exterior, but in a perpetual relationship with Judaism, without ceasing to refer himself to it, without ever consenting to forget it, without ceasing to call himself a Jew. How is it possible not to recognise in this confrontation, in this barrage of questions, a primary aspect of Jewish existence?

There is an ancient paradox about the Seder night: Is this night about the questions or the answers?

One the one hand, we are familiar with the truism applicable to almost every moment of the Seder, that we do all the little things to make the children ask, to get them curious. For some of us, that refers to the actual children in our lives, and for others, it’s about awakening the curious questioning of our own inner children—but regardless, the emphasis is on this most Jewish sense of questioning. For others, it’s about the answers of the night, the faith and stories that we pass on.

An Egyptian Jew, Jabès went into exile due to the 1956 Suez Crisis, heading to France, where he entered the world of postwar French poetry, becoming a noted writer, fragmentist, aphorist, and poet. Loosely affiliated with the surrealists and later the postmodernists, Jabès was never quite at home in any one group. In fact, his entire project in a way was this, to remain unidentifiable, removed, distant, other. He stayed in France for the duration of his time, receiving the Grand Prix for Poetry in 1987, and becoming something of an enigma amidst the postwar Jewish questioners, those that asked questions about the echoes of God after His great Absence in the Holocaust. Elie Wiesel, Theodore Adorno, Paul Celan—there is a strand of writers who write from a place of confusion, ambiguity, departure from what was without quite arriving at the meaning that we, the readers, wish for. In many ways, Jabès was the apotheosis of this project, leaving articulation behind and embracing only this: the question itself, questioning God, the Jew, the Torah (or in his words: The Book), writing, and so much more.

Jabès had several foundational projects, each as mysterious and thought-provoking in equal turn. There is The Book of Questions, The Book of Resemblances, and Intimations of the Desert, as well as The Ineffaceable the Unperceived, along with a score of smaller works, each with names that are similarly provocative (Think: The Book of Margins, The Little Book of Unsuspected Subversion, and Desire for a Beginning Dread of One Single End, a title that on its own gives me an entire existential crisis).

Each of these works is radically creative, unique, and singular, and also predicated on a simple assertion that we can put best in the Jewish idiom: The question of the wise one is half the answer. Particularly in The Book of Questions, Jabès gives credit and weight to questions that are eminently Jewish and eminently depth-inducing. This book is full of mythic figures, each having characters by the name “reb” that feel like they’d be more at home in the Talmud than in enigmatic French poetry. Here’s a taste for you (you certainly deserve it if you’ve read this far):

Mark the first page of the book with a red marker. For, in the beginning, the wound is invisible.

“What is going on behind this door?”

“A book is shedding its leaves.”

“What is the story of the book?”

“Becoming aware of a scream.”

“They are privileged readers. They come in small groups to give us their comments.”

“Have they read the book?”

“They are reading it.”

“Did they happen by for the fun of it?”

“They foresaw the book. They are prepared to encounter it.”

“Do they know the characters?”

“They know our martyrs.”

“Where is the book set?”

“I am the keeper of the house.”

“Where do you come from?”

I honestly can’t say what this means and really can only speak to what these words might mean. Jabès speaks always from exile, from the exile of the Jew who left one land for another, and yet is never quite at home in either. The question, for Jabès, is thus always marked by the wound of exile and also the trace of redemption—it is what marks the impossibility of life and yet the very possibility of the whole thing in the same point. The questions don’t quite give us the right answers, understandable answers, but they give us intimations of the answer, hints towards the answer that we will have to figure out for ourselves.

This brings us back to the Seder night. The departure from Egypt—from the relative comfort of one exile for the discomfort of redemption—all stems from and leads us towards the question. We often feel discomfort with an aspect of our life, a subtle tension that lingers after a conversation or in a relationship, perhaps as we lay in bed at night, but we repress this discomfort, pushing it out of our attention. Yet as the therapeutic adage tells us, what we resist, persists, for we can never quite hide from our fears. As such, it is the question itself—the truthful articulation of our dissonance—that is the very beginning of redemption.

Rilke’s words come to mind, from his timeless Letters to a Young Poet:

You are so young, so much before all beginning, and I would like to beg you, dear Sir, as well as I can, to have patience with everything unresolved in your heart and to try to love the questions themselves as if they were locked rooms or books written in a very foreign language. Don’t search for the answers, which could not be given to you now, because you would not be able to live them. And the point is, to live everything.

Perhaps then, someday far in the future, you will gradually, without even noticing it, live your way into the answer. Perhaps you do carry within you the possibility of creating and forming, as an especially blessed and pure way of living; train yourself for that but take whatever comes, with great trust, and as long as it comes out of your will, out of some need of your innermost self, then take it upon yourself, and don’t hate anything.

But whereas Rilke tells us to live the questions, Jabès not only actually lives the questions himself, he shows us how. For the festivus for the restofus, we can learn from Jabès how to ask the questions that linger under the surface of our hearts. To emerge from the exile in which we all live, the first step is asking the questions—all of them and any of them—until we find the right question. Perhaps on the Seder night, we can all look towards our cognitive dissonances, towards our confusions and subtle doubts, with love and curiosity, and with less fear, and we can ask the questions that trouble us. Jabès understands that the catastrophe of exile does not always have a discernible set of truths to it, but is constituted instead by a set of questions, somewhere within which lives our ineffable truth.

To make the children ask, we joke, and yet we too can ask—we too can ask. Before the answers, before the redemptions, we need to ask the questions. We’d be well advised to ask them with the help of a therapist—who is adept at helping others ask the right questions—or with the help of loved ones or a notebook. Is Jabès an exile writer or a redemption writer, your children wonder? I’m not sure, but I trust you to let me know. (@Yehudahamaccabi on Twitter, yehudafogel1@gmail.com, be a pal and lmk whatcha think).

To honor the life and legacy of Edmond Jabès, liver of the questions, we bring you the inimitable Maurice Blanchot on Edmond Jabès’ Book of Questions, Emmanuel Levinas and Jean Starobinski on Jabès and the Difficulty of Being Jewish. Most importantly for you kind readers is this interview with our Jabès, in which all is revealed. Don’t forget to download the full PDF to get all three articles.

Let us close with words of this great enigma, in the hopes that we too might articulate the great mysteries that dwell in our hearts this Passover:

“You will follow the book, whose every page is an abyss where the wing shines with the name.”