Three Reasons Why We All Love Censorship

Why do we all love the things we aren’t supposed to love, so very much?

Why is looking into people’s illumined windows in New York City so much more interesting than when you are in people’s houses with their invitation? (Cough, not that this author perches at illumined windows of apartments near you, just looking…)

Why are the only books worth reading somewhat inaccessibly locked away in Hogwarts’ restricted section?

And why is censorship, the story of the stories we don’t tell, in some ways so much more interesting than the stories we do tell? Here are three of our answers to these questions, our favorite reasons for

1. Don’t look now! The Thrill of the Illicit

The simplest, most psychologically obvious starting point to this discussion is an age-old truism: it is the knowledge that you aren’t supposed to enjoy this pleasure that makes the pleasure worth enjoying. Hidden somewhere between fear and desire is the thrill of the illicit. In the Jewish idiom, Mishlei 9:17 puts it this way: “Stolen waters are sweet / and bread eaten furtively is tasty.” Blame the fall from grace, the expulsion from Eden, or the sly smiles that our parents had on their faces as they would furtively eat that extra licorice, we often identify that which we shouldn’t do with an otherness that is deeply enjoyable. This is an instinct that some strands of Jewish thought are deeply aware of and in touch with – the idea of ‘sinning in the name of heaven,’ or aveirah lishmah, might on one level be thought of as a doctrine engaging with this instinct. Reading censored works, works about censored works, or works about works about censored works (this article?) gives us the slightest taste of this thrill, our instinct for the underbelly of societal life, albeit in a spiritually/intellectually enriching way, or so we hope.

However, this thrill is commensurate with the societal restrictions around the proscribed material. In a more closed society, the stakes are far higher for both the pain and pleasure of engaging with the forbidden. In an open society, the stakes are lower – less is forbidden, or at least less seems as openly forbidden, and so the rush that we get from breaking from the societal norm is also diminished. Every society, whether by design or necessity, does have its own circumscribed social code or contract, and so this thrill works its way through history, changing shape and language as our means of communication develop. In total: we like reading about censorship because we know we shouldn’t.

Addendum: Comedians play with this thrill constantly and play an important role in society precisely through their challenging and paradoxical upholding of social scripture. Only by breaking from what we expect from society, do comedians provide us with a better understanding, intimacy, and freedom within the rules of society. Comedians, the ultimate breakers of the social contract, are also often the best articulators of the same contract. Go figure that one out.

2. No Jews Allowed: Literature for Insiders

The comedian, Groucho Marx, famously put the conundrum this way, in a resignation letter from a social club: “I don’t want to belong to any club that will accept me as a member.” You can call this a deeply Jewish idea if you’d like—and there is something deeply true about the story of the American Jewish community in this line—but there is also something more universal at play: our desire for exclusivity. We all want to feel chosen, desired, special, in some way or another, and the same thing is true about the books we read. Reading a censored book doesn’t just have the thrill of the illicit, but also the thrill of being an insider of sorts, in the know.

There is always a sort of mystical fraternity between author and reader, a shared intimacy that is privileged only between these two. One isn’t brought into this covenantal bond when told about a book or when they check it out on Amazon or from their library. Whether they enter that bond when they buy the book is a matter of some dispute, but one thing remains clear: by reading the book, the author and reader meet each other. This is a limned relationship, specific to the chosen, subtle self-portrayal of the author and the headspace of the reader, but it can be a deep relationship nonetheless. Thus readers are always insiders—but perhaps more so when it comes to censorship.

Because censorship is multivalent, this has many different expressions. When an author’s works are censored, learning about the censorship is a pulling back of the veil of sorts on the often mysterious process of writing. We are desperate to understand where books come from, how ideas become paper, and the censorship gives us a window into who the author is (‘I heard that she planned on including a story about … but her publisher didn’t let her’), and the paths that this book didn’t take to get there.

Put differently—when a book is censored, we become a more active participant in the reading process than before. Whereas we often are mere listeners to the narrative of a text, engaging with censored material allows us to become active participants in the meaning-making process that makes reading so fun. What do we make of the excised texts? Once we are used to the censored version of a work, we have a funny sort of relationship with the once-censored material. We understand its originality, but we often can’t help but feel that the material is ‘new,’ a foreign cousin to the text we know and love, albeit with some troublingly familiar similarities. Above all else, whether you are in or out of a text, the bond between writer and reader is deep, and this writer, wherever he may be, appreciates this reader, you, wherever you might be right now. If we ever see each other on the street or Twitter, come over. Say hello, email me (Yehudafogel1@gmail.com), message me on Twitter (@Yehudahamaccabi), buy me a coffee (or a car?), and let’s get to know each other. I said it. Your move, reader.

3. Parrhasius’s Painting: Why we Love the Concealed

The artistic style of trompe l’oeil, which is French for ‘deceive the eye,’ is a technique in which artists manipulate the perspective of the viewers to create illusions. The historian of the ancients, Pliny, tells a story in his Natural History that you might recognize about two painters who entered in competition. One painter, Zeuxis, pulled the veil off his painting to show painted grapes so realistic that birds flew at them, picking at the thin surface of his work. Zeuxis proudly turned to his rival, Parrhasius, and urged him to take the veil off his own painting. But the veil itself was part of the painting (mic drop). In Pliny’s accounting, Zeuxis remarks here “I have deceived the birds, but Parrhasius has deceived Zeuxis.” Parrhasius won.

This lovely story has that universal quality that makes the great stories great, and it can be used as a parable for pretty much anything. Enter Jacques Lacan—a French psychoanalyst famous both for his counterintuitive reads and his eminent Frenchness—who sees in this story a truth about concealment. He argues that only Parrhasius’s painted curtain was a true trompe l’oeil, because the missing item itself was crucial to the effect. It is not the illusion that defines the trompe l’oeil, for both paintings have illusion, but it is the very promise of something more there that is then upset. This is the deeper appeal, the tantalizing promise of the deception. Parrhasius promises you something behind the curtain, but then you realize that the curtain itself is all that you get. 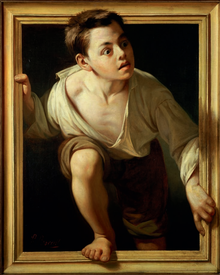 For Lacan, the cause of desire is the movement from our own deception to our realization of our deception, when we realize that the art we thought to be three-dimensional is really two-dimensional. These paintings that appear to pop are desirable for Lacan not just because they appear to be three-dimensional, but rather because we notice that they are two-dimensional – we desire the loss. In Lacan’s jungle gym of words, he calls this the objet a, the lost object in the inextricable real, the longing at the heart of all desire for that which was lost.

Still with me? You might be thinking: very French. You’d be right. But this might be an operative part of what’s happening with our incessant drive to think/talk about censorship and cancel culture and all of its many faces. There is a similar gap—a shift that occurs when we think and read about censorship—between that which we know of something and that which eludes us, that which is out of the reach of our understanding. It is this concealment that draws our attention, the ellipses and lacunae that draw our attention. Like the Wizard of Oz behind his curtain, like the unpronounceable hidden God of ours, like the covered faces in a Rene Magritte painting, it is the hidden that catches our eye. Maybe if we stare long enough, we just might find what we are looking for.