Weekend Reader – Diving Into This World: Joey Rosenfeld in Review 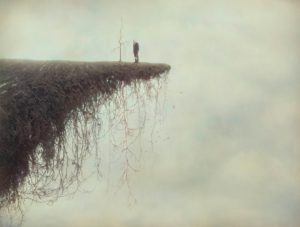 What does mysticism offer a chaotic world? This week, Joey Rosenfeld, therapist, teacher, and mystic, talks to 18Forty about his path to mysticism. Joey brings his deep erudition and life-affirming stance to his conversation with 18Forty. This week’s Weekend Reader offers context and content to Joey’s thought on the deeply life-affirming project of mysticism, and how mysticism can heal a broken world.

Franz Kafka, the Jewish-German writer who understood well the complexity of engaging with the suffering of the world, once wrote in a letter:

You can hold yourself back from the sufferings of the world, that is something you are free to do and it accords with your nature, but perhaps this very holding back is the one suffering you could avoid.

Kafka is saying that the suffering that occurs from holding back from suffering is the only truly avoidable suffering; the pain of avoidance is the avoidable pain. So often in our lives, it is our desperate attempts to not engage with our own pain and the pain of our world that lead to untold further suffering, greater complications than we first encountered.

Beauty and meaning and joy are present in the world not only despite the brokenness of our fragile world, but precisely because of it. In a lecture on “despite” and “precisely” Joey cites a line from the Mittler Rebbe, the second leader of Lubavitch, followed by his own commentary:

“I heard from my father who heard from his teacher [the Maggid of Mezritch]: It is impossible to understand the secrets of the Torah unless one has a natural darkness in their nature.”

Joey Rosenfeld: If a person wants to understand the benefit of secrets of the Torah, there has to be an acknowledgement that things aren’t fine on a surface level. If a person doesn’t recognize that things aren’t fine on the surface, there is no need to descend into the reservoirs of what lies underneath. Somebody who feels like everything is in order on the outside has no need for interiority. One who wants to understand the secrets of Torah, must have a proclivity towards the brokenness of life.

Joey works with the very human ground of suffering, as an addiction counselor and spiritual director in a drug rehab clinic. In a touching profile of Joey’s work and thought in Mishpacha Magazine, Joey explains this process, and the wellspring of hope that is buried in the depths of suffering:

“While I’m not affiliated with any particular chassidus,” says Joey, “to my mind Rebbe Nachman of Breslov speaks most closely to this recognition that it’s specifically within a person’s pain or suffering or discomfort that he can come closest to Hashem. Not because that recognition forces you to do teshuvah and become better, but because it forces you to acknowledge that G-d is so large that He’s even found in those places as well. And I’ve found that my ‘clients’ in the center where I work — heroin addicts, hardened alcoholics, and other people who you wouldn’t want to run into in a dark alley — can relate in a very real way. You see, Rebbe Nachman says two things: that it’s forbidden to give up hope, and that really, there’s no such thing as giving up hope. That even when a person reaches a place where it seems he’s lost hope, even there there’s hope. That’s because that deep, G-dly part of the soul is never detached from Hashem, and can never really give up. I call it the irreducible part of the soul, that no matter how low we fall, as long as we’re still breathing, it’s there.

And on a certain level, all addiction, from both a psychological and spiritual perspective, is an attempt to numb the anguish of losing hope, to quiet that voice that drives the discomfort by telling you how things should be different, that you’ll never find your place, instead of being totally okay with who you are and where Hashem put you.”

In his conversation with 18Forty, Joey puts to words the anti-transcendent transcendence that mysticism offers the modern or postmodern person. This is a mysticism that works within the confines of human experience to find the divine in the mundane, and meaning from within the constraints of this challenging life:

Joey Rosenfeld: Rav Kook, who was a student of sorts and a very close friend of the Leshem, writes as follows, he says that there will come a time in history where you will not be able to explain even the Aleph Beis of what Judaism means without utilizing the deepest concept of mysticism.

Now, that could be because of miyut halevavot, or yeridas hadoros, or that the diminution of the hearts and minds of individuals are so sick that we need a nuclear blast. But the way I choose to see it is that, ultimately, the goal of mysticism and the goal of Kabbalah, especially through the lens of the Baal Shem Tov, is that the ideal is not to escape the real. Rav Soloveitchik, who was influenced by Hasidic teachings and mystical teachings as well, stresses this time and time again. The old style mysticism which seeks transcendence from the eminent plane of our experience is meaningless, it’s fantasy, it’s magical thinking, it’s unhealthy very often.

The mysticism that offers a rehabilitation of the modern condition, or the post postmodern condition, or however many posts we want to place in front of that, is that it allows us to find transcendence within immanence, to find something that transcends our capacity to rationally cognitize it or describe it within our daily experience, within the mundanity of this world. It’s much more about diving into the midst of life than it is about escaping this world in some flight of mystical fantasy. So on a modern level, the more and more we become aware of the holes in subjectivity, and the more we realize that those grand narratives that we’ve been fed as a culture for a very long time don’t stand up to the raging waters of reality, the more we need a rehabilitation of thisness, of being down here, of Olam Hazeh. And I think that that’s something that is profoundly relevant in all kabbalistic texts: the centrality of this place.

In discussing the powerful possibilities opened by mysticism, Joey put it best: “It’s much more about diving into the midst of life than it is about escaping this world.” This is what mysticism offers a tired, fragmented world: a chance to dive headfirst into this world and discover more than we ever anticipated. In his masterful and idiosyncratic “Is” series of lists on Twitter, Joey puts scholars and mystics in conversation across time and space. In one such list, we catch a glimpse of this relationship between mysticism and this world. Commentary is beyond the scope of this context, so read and reflect on the manifold meanings offered here from your home:

For many contemporary thinkers and spiritual seekers, Kafka represents a kind of modern mystic, or as Robert Altar puts it – “Kafka as Kabbalist.” This identification, like Kafka himself, provokes without providing easy understanding or interpretation. To think about it, read Kafka’s short story “Before the Law”, and the correspondences between Walter Benjamin and Gershom Scholem about Kafka. On one level, it is the very desperate drive for meaning and hope beyond the fractures of this world. However, it is through the fractures of this world that truly highlight the mystical impulse of Kafka. Walter Benjamin wrote this of Kafka:

To do justice to the figure of Kafka in its purity and its peculiar beauty one must never lose sight of one thing: it is the purity and beauty of a failure. The circumstances of this failure are manifold. One is tempted to say: once he was certain of eventual failure, everything worked out for him en route as in a dream. There is nothing more memorable than the fervor with which Kafka emphasized his failure.

Søren Kierkegaard, the great Danish philosopher, once said that “earthly hope must be killed; only then can one be saved by true hope.” Albert Camus, philosopher and author, felt that Kierkegaard’s line was true of Kafka as well. While we often think of Kafka as a writer of literature of despair, Camus sees in Kafka the death of early hope, as well as the audacity of true hope. In his lecture on the impossible hope of Kafka, Joey paints a picture of the desperate, impossible, moving hope that constitutes humanity, and that has moved the Jewish experience.

For more on this topic, visit http://upgrapp.com/18forty/mysticism/