Our communal conversation today around those who decide to leave religion is increasingly self-aware, and the modes and mediums in which this conversation happens are constantly in flux. Understanding the changes in this conversation deepens our understanding of what the landscape of this issue looks like today. This month, 18Forty is thinking about the OTD (Off The Derech) conversation. Read on for an intellectual history of this discourse, all part of this month’s content on 18Forty.

In order to appreciate the ways this conversation has changed, we have to look back to the November 1999 issue of The Jewish Observer. This remarkable issue is titled “Children on the Fringe…And Beyond,” and it is entirely devoted to discussion about the children on the fringes of Orthodoxy. The issue includes moving accounts from parents, rabbis, educators, and therapists. For a particularly poignant sampling, in ‘“Hereby Resolved…”: A Father’s Kabbalos’, one father states his heartfelt hopes simply:

I will remember that I am your Tatty (father) and that I love you. I will remember that you are a child. I will find ways to show you that you are loved. I will say “I love you” more often and I will express it in other ways as well, perhaps with touch, tone of voice, smile, look on my face, and by giving of my time. I will not degrade you, laugh at you, ridicule you in any way. I will say “I am sorry” when I’m wrong. I will criticize less and focus more often on the positives in you. I will look for the big picture, keep my eyes on the prize, the prize of a loving, caring, joyful relationship with you…

In another article in this issue, Rabbi Ahron Kaufman sharply reminds readers that a life of religious movement, personal engagement, and questioning should not only be for those that leave:

To be satisfied with one’s Judaism simply as a lifestyle inherited from one’s parents is not being “FFB.” Rather it is “FOB,” a Fact of Birth. But this is not Judaism. Hakadosh Baruch Hu does not want genetically-produced robots. 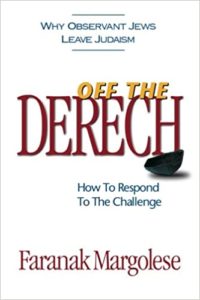 The issue notably includes perspectives from esteemed psychologists, Dr. David Pelcovitz and Dr. Norman Blumenthal; a conversation with Rav Shmuel Kaminetzky; and educator-activists, such as Rabbi Yaakov Horowitz  —  an important early voice in this conversation. However, it is important to note whose perspective did not yet make it to the conversation: those ‘on the fringe’ themselves. This point frames a crucial change in the conversation about those leaving the fold. Over time, this conversation has shifted from largely being about those that leave  —  from the perspective of their parents/teachers/rabbis/therapists  —  to a conversation from those that have left, and occasionally with those that have left. In the early days of this communal conversation, the focus was largely on understanding and responding to what was perceived to be a crisis. From this issue of the Jewish Observer, to Faranak Margolese’s 2005 book Off the Derech: How to Respond to the Challenge, the voices of those that departed Orthodoxy were largely absent from the conversation.

With the growing popularity of the internet, these voices found a home: in web forums, blogs, and Facebook. In blogs such as the popular Unpious and Facebook groups like Off the Derech and OTD Meetup, quiet voices found expression and community. Struggling with religion  —  which for many was once the quiet, lonely experience of an individual  —  was given the tools of communal connection, and voices from the margin gained prominence. As these individuals were given connection and community, the world began to listen. In 2005, the era of OTD literature gained significant visibility, led by the publication of Hella Winston’s Unchosen: The Hidden Lives of Hasidic Rebels. Originally a dissertation focusing on interviews with Hassidic women, Unchosen became a lightning rod for focus on those that leave and those that stay. Controversial in some circles, beloved in others, Unchosen put the once-silent voices front and center.

Following this landmark book, memoirs of the once-Orthodox became a genre of their own. Shalom Auslander’s Foreskin’s Lament and Reva Mann’s The Rabbi’s Daughter set the stage, followed by Deborah Feldman’s high-profile Unorthodox: The Scandalous Rejection of my Hasidic Roots and Shulem Deen’s All Who Go Do Not Return: A Memoir. These books gave readers an inner look at the complicated world of decisions that go into leaving, and found popularity in both Jewish and non-Jewish audiences. This popularity is complicated, as writing about such painfully intimate material for both insiders and outsiders must be. Shulem Deen acknowledges the cultural voyeurism that feeds this popularity, and notes in a 2014 Tablet article:

People are usually very interested in what goes on inside insular communities because of their fascination with what seems mysterious and different,” he said. “I don’t think there’s anything wrong with it, although I don’t always like it. To some degree, there’s a dehumanizing element involved for the writer, and I find it a little discomfiting at times to be lumped into that realm of otherness.

As this genre grew in popularity, thought pieces about this burgeoning movement came to major media outlets like The New York Times and The New Yorker, often by writers that had already left Orthodoxy. Many of these memoirists offer strong critiques on the communities they left, as well as the occasionally powerful elegy to these communities. Considering these memoirs in light of the broader cultural and religious history of memoir writing also highlights the place they occupy in the broader tradition of confessional writing. However, while marked by some distinctive characteristics and trends, these memoirs are not homogeneous, nor is the experience of those that left. It is often too easy to downplay the complexities of this phenomenon and these people by looking only to the rigid social scriptures of Satmer and Skver. Taffy Brodesser Ackner, writing for The New York Times, advocates taking a deeper look:

It’s hard to talk about O.T.D.ers as a group, because like the rest of us, like ultra-Orthodox people, too, they are individuals. No two people who practice religion do it exactly the same way, despite how much it seems to the secular world that they rally around sameness; and no one who leaves it leaves the same way, either. In the region of New York City, New Jersey, and the Hudson Valley that Footsteps serves, 546,000 ultra-Orthodox Jews live in one of about five different sects. With a few exceptions, like the Skver sect in New Square, N.Y., which has actual boundaries and operates its own schools, the ultra-Orthodox live not in cloistered neighborhoods, but among secular America in Crown Heights, Flatbush and Williamsburg, Brooklyn, and beyond. Perhaps it’s easiest to think of them as living in a different dimension — occupying the same space but speaking a different language (Yiddish, for the most part), attending different schools, seeing their own doctors, handling judicial issues among themselves and eating their own food from their own markets.

The complicated dynamic of the decision to stay or leave are not monopolized by any one group or sect. The challenges and opportunities of religious life affect both Skver and Scarsdale. Talia Lavin, writing about her departure from Modern Orthodoxy in The New Yorker, says:

My own life in the years since leaving my faith has involved a complex process of reinvention. Even though I did not experience the educational and economic challenges others have faced, the transition was wrenching, and involved an erasure and redrawing of my moral calculus and place in the world. Outside the bounds of my old identity, I felt modernity rushing in. A world without religion was chaotic, like a kitchen without separate dishes for dairy and meat, or a suit that mixed wool and linen. Leaving the path offered its own pleasures: shrimp and pork and other satisfactions of the flesh. But every Friday night I could hear, in my head, the songs of the Sabbath meals I wasn’t attending, and the food I ate on fast days burned in my gut.

Along the way, I found others who, like me, had left the faith, some of them through a Facebook group called “Off the Derech.” They knew the songs; they knew the dense scent of sacred palm fronds and myrtle and citron; they faced the Talmudic quandaries of navigating relationships with those still observant. They knew the joys of leaving, and its price. “When you’re doing this with other people, it’s easier, and that’s what’s beautiful about the O.T.D. community,” Mayer’s friend Levin said. “You have other people like you.”

Religious life, and the decision to leave, is complicated, and should be treated as such.

The intense interest in these books contributed to the current surge in cinematic portrayals of the religious, as well as religiously rebelling. One of Us, and now Unorthodox, have started broad conversations on media portrayals of the ultra-Orthodox, as well as on communal norms in ultra-Orthodox communities. Many of the people that were once ‘children-at-risk’ or OTD have become powerfully articulate voices on the issues that they faced in the community that they once occupied. In issues of education reform, sexual abuse, and addiction, the voices of those that left have powerfully influenced the lives of those that stayed.

Given the depth and complexity of those that stay, and those that leave, religious terminology is of particular importance in this issue. OTD, kids at risk, “the departed”, kofrim: each term has its own accompanying set of imagery and associations. As this issue comes to age, it may be time to move from the language of OTD  —  which presumes one path for all, a religious binary that far from accurately portrays the complicated spectrum of religious life  —  to a more honest and rich term: chozer b’sheilah, return to questioning. Popular in Israel, this term is a clever wordplay on chozer b’teshuvah, one that returns to the faith, and is more understanding of the complexities of the lived religious experience. This term recasts the decision to leave as one of essential religious movement, which is valuable no matter the direction. Understanding the questions of those that leave allows each community to be a more engaged, growing community. Entrances and exits both speak volumes. Different directions, as long as there is movement.

For more on this topic, visit 18forty.org/otd