A Letter to Parents of Intergenerational Divergees In this guest post, Dr. Press Schwartz shares three fundamental theorems that she has learned as a parent.

I write this to you as someone who has been there and done that, or perhaps is there and is doing that. While I am still in the thick of child-rearing (my youngest is 10), some of my children are already clearly living their lives in ways different than I imagined when I held all six or seven pounds of them in the moments after their births.

I am not smarter than you, or wiser than you. I may not even have more experience with this than you do (though I have a fair amount). I do not have the ultimate answers for what you are experiencing, or how to handle it. I’m the one writing this, and not you, because I’m Dovid Bashevkin’s friend, and he asked me to. But if there’s anything I have to offer this conversation, it is that as a high-school teacher and administrator, I not only live this myself, but have had a front-row seat to watch countless other families living it. And so it is from that broader base of experience that I draw and share these truths with you.

The first fundamental theorem of parenting:

Your child is the person he or she is, not the person you would have designed them to be.

This is the entire Torah of raising children. All the rest is commentary.

Which leads me to the first corollary:

Our pain is not our children’s problem.

Our kids are not our mini-me’s, not our projections of our egos into the world, not our chance to relive our past glories or to fix all the things we didn’t do. They’re just themselves, living their lives. They didn’t become who they are, whatever that is, to spite us. They are driven by their own dreams, needs, desires, sometimes demons. It’s hard to believe, given that we brought them into the world and raised them in it, given that we have lived with them for the first 18 years of their lives, more or less, that we are bit players in their story. This may be an adjustment, and it may be a hard one. We may need a sister, a friend, a therapist. We may need support systems and resources. (Please: find and access them. Take the help that is available.) But that is our pain to resolve. It is not our children’s problem, or burden, that the script they are following is not the one we wrote.

In any case, we cannot change it. We can only make them miserable.

You can’t recreate the wandering.

It’s not just that we want our children to end up where we are. Sometimes, we want them to follow the same path to get there–to have started in the same place, accumulated the same experiences along the way. We want the same things that were meaningful to us to be meaningful to them.

But see the first fundamental theorem of parenting. Our children are the people they are, not the people we designed them to be. They are living their own lives, not reliving ours. And the arc that we happened to live out cannot be recreated by them, and may not be meaningful for them. (They, after all, have different parents, different homes, different constitutions than we did.) We can share with our children how meaningful our personal, religious, or communal journeys were to us. We cannot expect our children to relive them.

The second fundamental theorem of parenting:

Decades ago, Emily Perl Kingsley published a very brief and rightly famous essay about having a disabled child. In “Welcome to Holland”, she analogizes the experience to preparing for a trip to Italy, only to land and hear the pilot announce that you’re in Holland. It isn’t what you expected, what you planned for, what you wanted. The question is what you do now.

I find the essay powerful and moving–but too narrow in its focus. It’s not that parenting a disabled child is Holland. All parenting is Holland. All of life is Holland. You make plans, get a guidebook–and find out you’re ending up someplace entirely different than you expected. That another parent’s Holland may be harder or more painful than yours doesn’t negate that every single one of us, in raising our children, faces things that aren’t what we planned for, that we have to adjust to. Sometimes you know you’re in Holland as soon as your child arrives in the world. Sometimes you learn you’re in Holland 3 or 13 or 30 years later. Some Holland is temporary and passes. Some Holland is lifelong. Some is awful and some is just unexpected. But it is all Holland.

The third fundamental theorem of parenting:

After the uphill comes–more uphill.

In middle age, I have become a fairly serious hiker. (As midlife crises go, it’s relatively wholesome.) While my hiking has taken me to Glacier, Big Bend, and Great Smoky Mountains National Parks; and to the Santa Monica and Adirondack Mountains; the hike that gave me a serious asthma attack was an hour from my house, at Breakneck Ridge on the Hudson River. (Kishmo ken hu. There are ominous warning signs at the trailhead. Take them seriously.) I was on the hike with my then-19-year-old son (who, fortunately, is an EMT), and who has been hiking for longer than I. As I wheezed my way up the nearly-vertical first quarter-mile, he taught me a hiking maxim: “After the uphill comes–more uphill.” I have been quoting it ever since.

Here I write, with blood and tears, to those fellow parents of intergenerational divergees who are in real pain. Seeing children angrily reject, or heartbreakingly suffer, or struggle in a whole host of ways. Hoping that if we can just make it past this challenge, or over this hump, then then then.

I am here to tell you the facts of life. That is, very often, not how things go. You get past one treatment only to have a setback or disappointment with the next one. You find a combination of medications that works only to have your child refuse to take them. You find a religious institution or mentor to connect to your child, only to have them decide they aren’t all that invested, after all. Just as things settle down with one child, they start up with another.

I wish it were the case that Things Work Out. Would that it were so: that if you cry enough into your Tehillim, say the tefillah of the Shlah [R. Isaiah Horowitz] with burning intensity on Erev Rosh Chodesh Sivan, take the parenting classes and do what they say, then the story has a happy ending. That’s not how the Ribono Shel Olam runs the Ribono Shel Olam’s world. Sometimes you put your heart and soul, all of your kochot [strengths] and all of your tears (and all of your money) into a child, and they don’t end up better. Don’t end up reconciled to Judaism, or to you. Don’t end up back at your seder.

There isn’t much to say to ameliorate that pain. Find people who understand and empathize–and avoid, at all costs, people who say things that cause additional, unnecessary pain. (It is much better to say nothing, or to say “My heart hurts for you,” than to say “At least…” or “Hashem doesn’t give you what you can’t handle” or “Maybe you should try…..”)

I, for one, would rather be told the truth squarely, even if it is a tough one. “Relationships don’t come with guarantees,” I once read. “Washing machines come with guarantees.” Children don’t come with guarantees. Washing machines come with guarantees. The question of why, if God is benevolent, people suffer, is a question far older than we. The question of how Hashem doles out how much to whom is far beyond me. I do not know. I cannot answer. But we are–I am–in good company. Avraham and Sarah, Yitzchak and Rivka–they, too, were parents of intergenerational divergees. And Yaakov Avinu, who is praised that “mitato sheleima”–that all of his children remained on his path–well: Reuvain. Yosef. Yehuda. Dina. Binyamin. Things may, in fact, have all worked out. But there was a whole lot of Holland along the way.

Rivka currently serves as the Associate Principal of General Studies at SAR High School in the Bronx, New York, and lectures widely on issues of contemporary importance to the Jewish community. A fellow at the Hartman Institute, Rivka earned a Ph.D. in History of Science from Princeton University, writing her dissertation on the cultural history of the Manhattan Project. Rivka has also served as an adjunct professor of history at Yeshiva University and Stern Colleges. An important voice from the front lines of Jewish education, Rivka has long been a passionate articulator for the importance, and lack, of values education in Orthodox day schools. 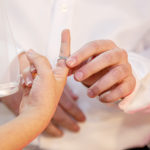 When Marriages Don't Make It When Marriages Don’t Make It

The reality is that not every marriage will, or should, continue until one of the partners dies. That’s something we need to talk about.